If you grew up watching nature shows about Australia’s wildlife, you know it wins hands-down on the extremes. It makes sense, then, to expect the Australian cockroach to be bigger and scarier than most of its cousins around the world.

In fact though, it’s about the same size as the American cockroach and just as hesitant to interact with humans.

The Australian roach has a more colorful look than other cockroach species and tends to stay outdoors, but that doesn’t make it friendly. If you’ve seen these cockroaches hanging around your house or business, it could be only a matter of time before they venture in looking for food.

In this article, you’ll learn how to identify the Australian cockroach, what it eats, where it lives and how to keep it out of your home.

How to Identify an Australian Cockroach

Australian cockroaches are relatively large roaches, reaching between 1 and 1 1/2 inches in length. Their size and mostly brown color makes them easily mistaken for American cockroaches. But they’re easily distinguished from American roaches by distinctive yellow accents, particularly light yellowish stripes along the front edges of their wings.

If you wanted to distinguish a male from a female, you could also look to the roach’s backside, where in addition to a pair of appendages known as cerci (which both sexes have), the male has a pair of tiny appendages called styli that it uses during mating.

History and Distribution of Australian Cockroaches

Like many other cockroach species, the origins of the Australian cockroach, Periplaneta australasiae, are not quite true to its name. It probably originated in southern Asia, then traveled to Australia and elsewhere on board ships transporting cargo across the world.

Now Australian cockroaches are worldwide pests, most common in the southern United States where temperatures are warmer year-round.

Habitat and Diet of Australian Cockroaches

The Australian cockroach is an outdoor species that lives in colonies. These creatures need warm temperatures to survive and often move indoors when temperatures become too cold. They usually inhabit locations with high humidity, such as tree bark and piles of wood or leaves.

Australian cockroaches are also called “greenhouse cockroaches” because of their tendency to infest greenhouses in cooler climates. They’re not really a crop pest but enough of them can hurt young plants.

Indoors, you’ll find Australian roaches in areas close to food and water: sinks, bathtubs, cabinets, drains and water pipes. Unfortunately, being so close to a food supply, your kitchen is a prime location to colonize. Apartment buildings, shopping centers, malls, and other large structures are also at risk of invasion by Australian cockroaches.

Australian cockroaches grow from egg to adult in about a year. The average lifespan of an adult cockroach is 4 to 6 months.

Females lay egg cases, which contain about 24 eggs each, in sheltered areas and in material such as moist wood. When it’s time for the eggs to hatch, the female will hide the tiny egg case out of reach. You probably won’t find cockroach eggs (or even nymphs) very often because the creatures are very careful at these stages.

Nymphs (baby cockroaches) molt several times as they grow, eventually developing their wings and before that, blotchy yellow spots along their backs. In 6 to 12 months, nymphs reach the adult stage and begin producing their own eggs. The adult lifespan of the Australian cockroach is about 8 months.

Where Might I Find Australian Cockroaches on My Property?

Australian roaches do enter buildings. If you find evidence of indoor cockroach activity, it’ll probably be in the kitchen or bathroom. It’s tough to identify the species based only on droppings or a glance at a fleeing roach, though. Look closely for the yellow markings to identify an Australian roach.

Since it’s an outdoor species, you’re more likely to find them in your garden or in the trees and shrubs around your house. Their need for humid conditions leads them to other places, as well. You might find a colony living under your pool deck or hiding around your hot tub.

If you find a large roach in your bathtub, it might be an Australian cockroach that’s climbed up from the drain. That could be a sign that there are more traveling along your water pipes. A leaky sink pipe can attract roaches to humid conditions inside the cabinet below.

Maybe their yellow markings make them look a little less ugly than other cockroaches. But if they invade your home, don’t be fooled by what they’re wearing–they’re not friendly guests.

Though outdoor cockroaches are generally less of an immediate threat than more prevalent indoor species, they’re still dangerous pests to deal with. They eat feces, garbage and other disgusting things. They also live in lots of unpleasant places and pick up bacteria from many sources.

Since they don’t wipe their feet, they’ll track that bacteria all over your kitchen counters, dirty dishes and leftover food. Any food they fed on or cooking surface they touched should be considered contaminated.

Australian cockroaches have been found to carry Salmonella and other pathogens. You definitely don’t want these pests taking a liking to your cooking and building a colony in your home. They can also damage plants when cool temperatures force them into a confined space like a greenhouse.

As if spreading bacteria weren’t bad enough, cockroaches produce allergens, too. Their molted skins and droppings can cause reactions in some people, especially those with asthma. Sneezing, skin irritation and trouble breathing are some of the symptoms of an allergic reaction caused by cockroaches.

How to Eliminate Australian Cockroaches Quickly

Getting rid of Australian cockroaches is difficult and might require professional help. But there are certain steps you can take:

The first step is to identify the source of the problem, beginning with where they’re hiding. You know to look in areas with plenty of humidity and easy access to food. You can use baits to attract and kill the roaches once you know where to put them.

You can also combat an infestation by sealing up the gaps where pipes enter your home and by closing any cracks or crevices in your kitchen or bathroom with caulking.

If you suspect there’s a large Australian cockroach infestation around your house or want to take no chances against these pests, call a professional pest control service. They’ll come up with plans of attack and defense that will help you control the problem and prevent it from returning.

Speaking of defense, preventing Australian cockroaches from invading your house or business means taking an honest look at your habits and acknowledging that you might have some weaknesses: we’ve all left food out overnight or occasionally put off vacuuming for longer than we’d like.

Cleaning is one of the best ways to control Australian cockroaches because it takes away their food sources. Sealing pet food and pantry items in glass or plastic containers is also important. Roaches are resilient pests and excellent survivalists but, in the end, they still have to eat.

It’s also important to remember that Australian cockroaches need moisture. Leaky faucets and pipes create standing water and increase humidity. Keeping every part of your house dry and ventilated is part of a strong defense against cockroaches.

You should also do a regular check-up for holes and cracks that could let cockroaches and other outdoor pests into your home. That includes your garage and shed, where these pests could hide in boxes and be brought into your house accidentally.

Australian cockroaches have a unique style that sets them apart from other roach species. One thing they have in common with their relatives is that you don’t want them in your home or business. By following the tips above and staying alert, you can set up a good defense against Australian cockroaches and keep living your pest-free life.

Australian cockroaches prefer environments with plenty of moisture but don’t live in water. They’re fast runners and can use their wings to fly away from danger. You probably won’t see them swimming in your pool, though.

You might’ve heard them mistakenly called “water bugs.” American cockroaches frequently get this name, too. However, true water bugs–which do, indeed, swim–are not cockroaches.

How can I tell the difference between Australian and American cockroaches?

It’s true that Australian cockroaches are similar to American roaches in size and shape. They both have wings and both are primarily brown or reddish-brown. The main difference you’ll be able to see is the presence of bright yellow stripes along the Australian roach’s wings.

Australian cockroach babies are called nymphs. They’re much smaller than the adults and don’t have their wings yet. You’ll still notice some yellow splotches along their backs. These patches of color become more pronounced as they enter their later nymphal stages.

Yes, Australian cockroaches have fully-developed wings that let them glide and fly. They’re not strongly attracted to lights like smokybrown cockroaches, but they’ll fly away from danger and glide short distances to find food. 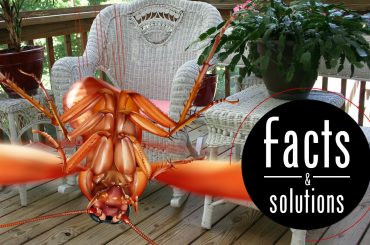 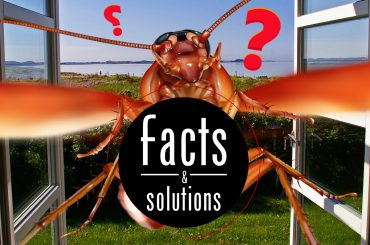 Terror in the Air: Can Cockroaches Fly? 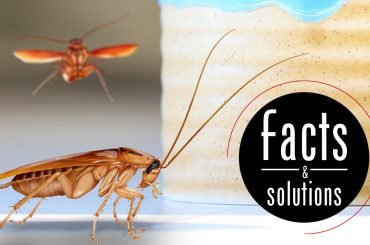 Cockroach with Wings? It’s Probably One of These 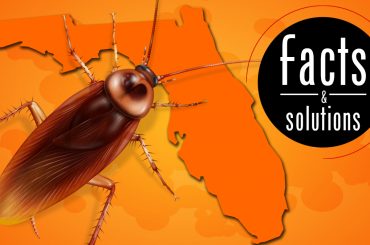 Taking on the Florida Palmetto Bug